Tips to Identify Issues in the Engine of Your Car

Engine failure is the bane of every vehicle owner’s existence. Whether it breaks down coasting along the freeway or slowly putters out over time, engine failure is one of a few vehicular problems that may end a car’s reign of the road for good.

Conversely, an engine that is regularly tuned and well-maintained over the years will experience an extended lifespan. Regular vehicular maintenance can also decrease the risk of a sudden, catastrophic engine failure, so it’s important to see a mechanic for fluid changes and concerns as need may be.

Some signs of engine failures aren’t obvious until they suddenly happen. Others can build over time. What may start as an occasional noise or small leak could have the potential to one day mean your engine won’t turn over. Before that happens, it’s good to know the signs of engine failure, what they could mean, and what to do if you’re ever unlucky enough to spot them.

One of the most common signs of engine failure is when nothing happens. This can be due to battery issues. If this is the case, the engine will click-click when the key is turned, but won’t turn over. Cars experiencing ignition or fuel problems will crank and groan, but won’t start fully. Some potential causes include:

Repeated overheating of the engine can cause permanent engine damage. So it’s important to get a too-hot engine inspected by a trained mechanic as soon as possible. Typically caused by low coolant levels, there are several mechanical causes of overheating:

A stalled engine can be a big problem, especially when it occurs in the middle of rush hour traffic. If your car stalls suddenly, the most likely culprits are problems with the fuel line, the fuel filter, or the spark plugs.

Smoke or steam is visible

Smoke or steam spewing from under the hood of your vehicle can be a frightening experience. The cause can be relatively minor or it can mean you need to vacate the vehicle immediately and call a tow truck. Either way, something is leaking. The root causes are typically worn gaskets, the wrong oil grade added to the engine, bad cylinders, or a poor crankcase.

If your engine is making new sounds, especially loud knocking or dramatic vibrations, they should be checked by a mechanic immediately. Causes include a worn starter, worn out timing belt, and other serious engine issues.

If you start smelling new, unpleasant odors while you’re driving, such as burning rubber, hot oil, or exhaust fumes, these can be signs of serious problems such as a melting fuel hose or a complete failure of the exhaust system.

My Euro Pro Will Help

We are located at Myrtle Beach and 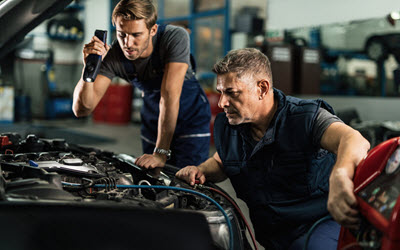 If you suspect engine trouble in your car, come to us without any delay to make sure you’re back on the road in style and speed with a guarantee that lets you follow where the road longs to take you.